A day barely goes by when we don’t receive a request for a custom map mural. It’s a great way for a business to make a bold statement in their board room or reception area. Companies will often request that we include their logo and perhaps all their satellite branches, franchises, development projects, mining operations, etc. We can even put a big red dot right on the family home.

We print the large murals in separate panels that are then bundled up and shipped off. To do that, we lay the map out in a computer program and slice up the image in the most efficient way to print on our machines with the least amount of waste. 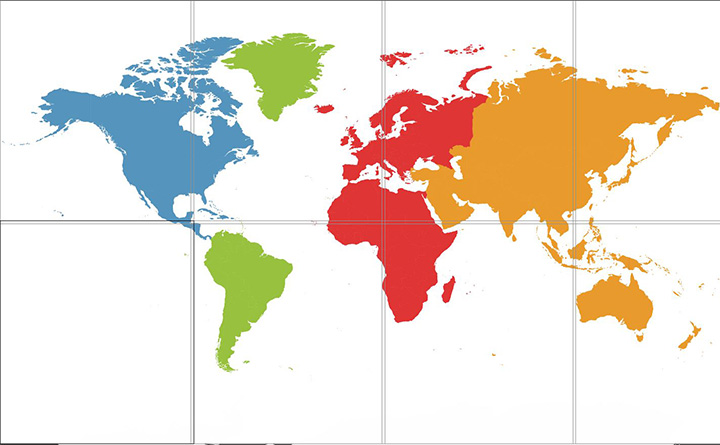 Above is the print layout of a custom map mural we made for a company in Bellevue, Washington. They provide internet, cloud, and communication services. The map was for their lunch room and needed to be finished in time for an important guest.

This is a story about making a mistake and then making it right.

It’s usually when you least expect it that Murphy’s Law takes effect. That would be a reference to Captain Ed Murphy, who was immortalized when he said of a technician working with him at Wright Field Aircraft Lab: “If there is any way to do it wrong, he will.” And thus, it is thought, was born the adage, “Anything that can go wrong, will go wrong.”

As we’ve mentioned before, we have five large-format printers. They hold long rolls of different kinds of paper that we use for different applications. For example, murals can be printed on a woven fabric with a tacky backing that sticks to the wall. They can also be printed on something closer to traditional wallpaper that has a water-activated glue on the back.

We were two-thirds of the way through the printing job and the roll ran out of paper. When changing out the roll, the layout we had made to size the panels (see image above) reverted to a previous layout. The result was that the last panels were sized slightly differently from the previous ones. We did not notice our error and inadvertently shipped the panels off to our customer. Bad.

Some days, Captain Murphy brings his friends to the party and that’s when it gets complicated.

The company called. We realized our error so we immediately re-printed the under-sized panels and sent our printing expert, Jessie, to personally deliver the properly-sized ones.

It’s a good thing we have Jessie. He’s been running the printers here for almost three years and knows the inks, the papers, and the machines like the back of his hand. He showed up in Bellevue and found the installation crew in the company lunch room looking at the mural panels laid out on the floor. They looked nervous. The CEO of the company was there. He wanted answers and reminded everyone that the mural had to be up for a scheduled VIP guest, or else.

Jessie added the new, correctly-sized panels he had brought and then noticed something strange. The white point of the new paper did not match that of the paper the previous panels had been printed on. It looked more off-white than white.

This was not acceptable to him so he made an executive decision. He grabbed all the panels, got back in his car, and came back to the shop. He figured out that the one roll had come from a different batch from the manufacturer and, for some reason, was slightly off color.

He re-printed the entire mural, using one roll of paper this time, and it came out perfect. Delivered, installed, and yes, a happy ending for our customer whose VIP guest was quite impressed. 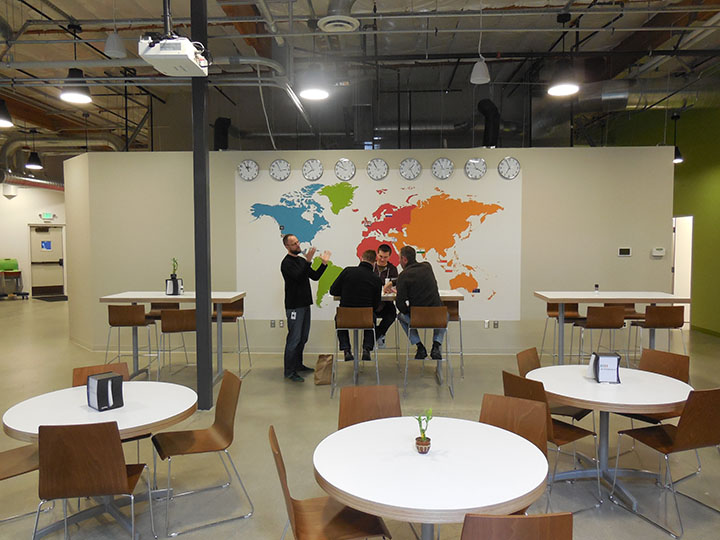