Early production of commercial map publications show many significant landmarks or highlights which help identify the progression of cartography over the centuries. Many of the earliest maps have had significant influence on succeeding map publications and also offer insight into the geographic knowledge Europeans possessed in this early era of map making.

In the year 1472 the very first printed map in Europe was published in an encyclopedia style of work originally compiled by Bishop Isidore of Seville during the seventh-century. This early printed map featured a simple diagram of the world which is now known as the "T-O" form. This rudimentary map consisted of three land masses (Africa, Asia, and Europe) separated by a T-shaped waterway and surrounded by ocean. This piece of work was printed in Augsburg, Germany.

Many of the publishing houses in Europe were producing unique maps in these early years. Among these early maps the first edition of Claudius Ptolemy's Geographia was printed in 1482 using woodblock maps. The Geographia is a compilation of maps and text pertaining to what was known of the world's geography in the Roman Empire of the 2nd century. The first part of the Geographia is a discussion of the data and methods he used. Ptolemy put all his data into a grand scheme. Coordinates were assigned to geographic features he was aware of in a grid spanning the globe. He measured Latitude from the equator just as it is today and put meridian of 0 longitude at the most western land he knew, the Canary Islands. Included in the text were instructions devised by Ptolemy on how to create maps both of the whole world and the Roman provinces. With only this text one could reconstruct the maps featured in Ptolemy's work using the coordinates of latitude and longitude he specified. During his time Ptolemy was aware that he knew of only one quarter of the globe and that his maps did not extend to the eastern sea. In the second part of the Geographia Ptolemy provided the necessary topographic list and captions for his maps which extended from 180 degrees longitude from the Canary Islands in the Atlantic to the middle of China and 80 degrees Latitude from the arctic to the East Indies and Africa. 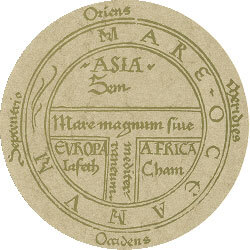 The world map among Ptolemy's collection is the first to be printed in woodblock format, it is also the first of its kind to be found in contemporary color (See image below). This edition of the map was published in Ulm and was the first one to be printed north of the Alps. These maps appear distorted compared to those of modern times because of inaccurate data gathered by Ptolemy, particularly the fact that he had estimated the size of the Earth too small. The atlas created by Ptolemy has been reprinted and redrawn many times over the years and is perhaps one of the most popular and influential works in the history of cartography. 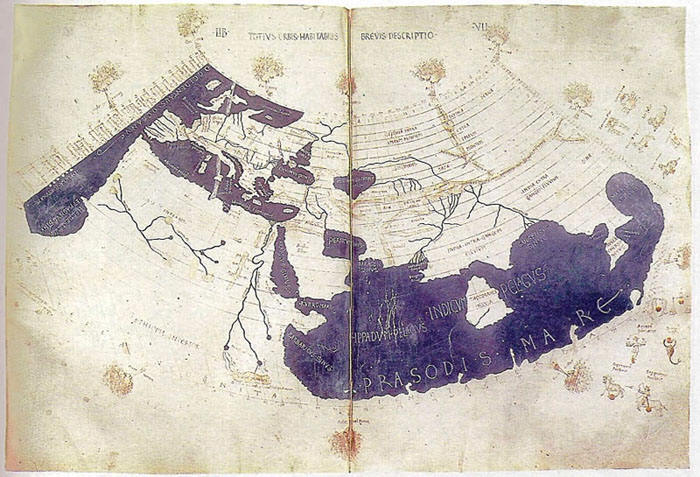 15th century depiction of the Ptolemy world map, reconstituted from Ptolemy's Geographia (circa 150)

During the fifteenth century not only were advancements in printing prevalent, but European knowledge of the world and its terrestrial form increased dramatically. Among the most notable developments were the Portuguese, under influence of Prince Henry, who died in 1460. The Portuguese expanded knowledge of the African western coastline progressively further southward. Even with efforts put forth by King Henry, traditional European fears of the Atlantic Ocean in southern latitudes had plagued progress during this period. Men feared that the sun could turn them black, the sea boiled, and that the sea eventually would end at the edge of the world. Over the course of 20 years at the turn of the century the map of the world was rewritten causing an influx of enlightenment that would open up Europe and its influence to new boundaries of the world.