Map Making in France and England

For centuries European knowledge of the vast riches, precious stones and metals, herbs and spices of the Orient had brought great inspiration to travelers of the sea. In 1487 Bartholomew Diaz became the first European to reach the Cape of Good Hope at the Southern tip of Africa helping to open a route between western Europe and Asia. Finding suitable routes of travel by sea was the key to commercial development and national expansion due to speed and ease in transporting men, arms, and goods.

The first known map to progress beyond the Ptolemaic idea of a land-locked Indian Ocean was conjured in an engraving from Italy in 1493. Francesco Rosselli's map shows the complete African coastline and Indian Ocean with a Ptolemaic South and East Asian coastline surrounded by islands.

Christopher Columbus, born in Genoa 1451, set sail in the search for an alternate route west to the Indies. Columbus spent most of his early years working his way up the decks in the sea trade. He later would find himself in Lisbon studying the work of early European cartographers, astronomers, and navigators. Columbus calculated China and Japan to be a mere two thousand miles across the Atlantic using the theories and calculations developed by Marco Polo concerning the size of the Earth and the width of a degree. Initially Columbus could not get official backing from Portugal for a voyage to prove these claims as his calculations were thought to be uncertain and he was seen as young, arrogant, and overly ambitious.

It was not until 1492 when Columbus left the Palos, a small Portuguese port, and set sail to land which he expected to be Asia, but would later in 1506 be known as America. The discoveries made by Columbus did not appear on a printed map until 1506 and 1507. These explorations made by Columbus during his three voyages between 1492 and 1498 were not the only to be made to western hemisphere during the 15th century. During this period another sailor named Giovanni Caboto, born in Italy and known in English as John Cabot, shared the belief that India could be reached by sailing across the Atlantic. Only he believed this could be accomplished by traveling a northerly route. Having found no support for a voyage in Italy he sought finance in London and successfully raised enough for one ship and a small crew. Under the authority of Henry VII Cabot set sail in 1496 only to reach no further than Greenland before being forced to turn back. Cabot's second voyage, also with one ship, set sail en-route to what he thought was East Asia and ended up landing on the coast of Newfoundland in 1497. Cabot and his men were perhaps the first Europeans since the Vikings to set foot on the American continent as Columbus did not reach the mainland until his voyage in 1498.

Maps of the New World

Print production of Ptolemy's atlas continued throughout the first half of the 16th century. By 1550 publishers had expanded the atlas to include many new world maps leaving the ancient maps to only satisfy historical or classical interest. In 1507 German cartographer Martin Wadseemuller produced the first map to include the name America; derived from the Latinized version of the explorer Amerigo Vespucci's name. This map was also the first to depict a separate North and South America as well as recognize the Americas separated from Asia by the Pacific Ocean. Until this map was published the conception of the world had greatly relied upon knowledge of the ancient Greeks. The voyage journal of Amerigo Vespucci offered Wadseemuller great insight , giving him enough material to plot a new map to include the New World to the west. Wadseemuller later published his own edition of Ptolemy's Geographia in 1513 which was reprinted in 1520, 1522, 1525, 1535 and 1541. This edition of the Geographia included a series of 20 maps consisting of the first detailed maps of Western and South Africa, the first map to concentrate on Southern Asia, and the first map of the new world. 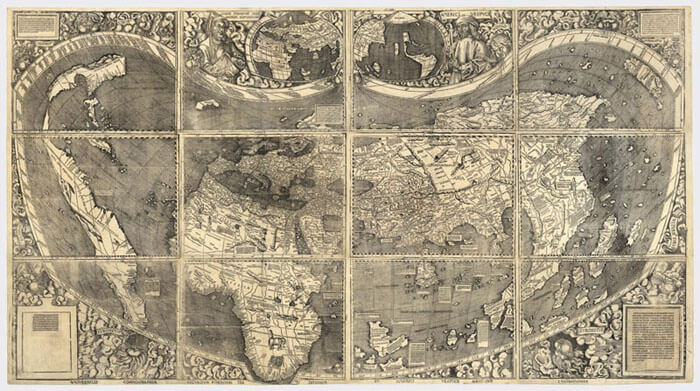 Among the important works during the 16th century in atlas production the Cosmographia by Sebastian Munster stands out most notably. Produced in 1544, the Cosmographia consisted of a number of new maps depicting a separate mapping for all four of the known continents. Munster's map of the Americas was also the first to depict the Western Hemisphere separately as well as showing a connected North and South America.

Italian map production began to progress during the 16th century into a more refined process. In Venice the first pocket or miniature map series was produced by Giacomo Gastaldi in 1548, containing sixty maps, 34 of which were modern and five containing parts of the New World. Atlas production during this time period was very limited, however map production was not. During the 16th century most maps of the world were engraved on individual panels by craftsman, often these panels could be bound together at the request of the purchaser. Most often many of the maps produced did not find there way into a bound volume, therefore rarely making it onto the market.

Map Making in the Low Countries

Map Making in France and England